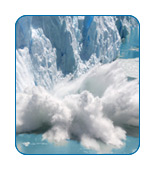 The highest concentration of tidewater glaciers on the planet can be found at Glacier Bay National Park and Preserve. Access to this natural wonderland is extremely limited and not all cruise lines can offer this highlight. But as a leader in the business, Princess is proud to include Glacier Bay on every one of our exclusive Gulf of Alaska cruises and cruisetours.

Spread across an impressive 3.2 million acres in southeastern Alaska, this treasure trove of scenic coastal islands, narrow fjords and substantial wildlife offers an inspirational glimpse of what Mother Nature does best.

When John Muir discovered Glacier Bay in 1879, he surveyed the unblemished panorama and declared it "still in the morning of creation." Muir wasn't the first explorer to be in the area. Nearly a century earlier, George Vancouver's ships sailed right past it because a wall of ice sealed off the entrance to the bay. But over the last 200 years, the ice has been steadily receding, revealing a stark landscape that's slowly being taken over by vegetation that can't resist the fresh rock and soil. The result is a lush, temperate rainforest of spruces and hemlocks that carpets large portions of the stunning terrain.

At the head of Glacier Bay is the Tarr Inlet, where scientists have found exposed rock that's believed to be more than 200 million years old. The Tarr Inlet is home to the Grand Pacific Glacier, an active body of ice that's slowly making its way toward the Margerie Glacier, which it last touched in 1912.

As you cruise by the northeastern edge of the robust Fairweather Range, you'll enter the Johns Hopkins Inlet, home to no less than nine glaciers. Framed by rocky slopes that stretch skyward more than 6,000 feet, these wondrous bodies are eclipsed only by the mighty Mount Fairweather itself, which at more than 15,300 feet is the highest point in southeast Alaska.

In the northeastern corner of Glacier Bay, the snow-covered Takhinsha Mountains feed the active Muir Glacier, which regularly sheds walls of ice into the bay. The brilliant blue glow of a calving glacier and the thunderous roar of ice crashing into the water below are sights and sounds that you'll remember for the rest of your life.

With such a diverse landscape, the park provides a variety of habitats for animals, big and small. Large colonies of seabirds, migrating ducks and geese, black bears, seals, sea lions, porpoises and whales are all common here.

WMPH Vacations and AlaskaCruises.com are located in Delray Beach, Florida. You may book online or contact us directly. Our business hours and toll-free phone numbers from the following countries are listed below:

Please note that all prices on our website are in US dollars, and travel purchases must be completed with a major credit card.Unless you are considering one of our custom cruise itineraries, certain cruise lines prohibit US-based travel agencies from selling to non-US residents.

All passengers regardless of their home country, citizenship or country of residency are responsible for obtaining the proper documentation for travel. This includes passports and visas for any country they may visit during their trip.

Unless otherwise indicated above, all cruise rates are per person, double occupancy, cruise-only without airfare, do not include government taxes and fees and quoted in in U.S. dollars. Ponant Cruises rates are based on foreign currencies that are converted to USD based on today's exchange rates. Rates are subject to availability, can vary by ship and sailing date, and for new bookings only. Fares are capacity controlled, and subject to change without notice. Port charges are included. Prices do not include additional service charges; Travel Insurance; and applicable government taxes & fees unless otherwise specified in the offer. Surcharges and fees implemented by a travel supplier, even after the reservation is made, will be the sole responsibility of each traveler and is due and payable in full prior to departure. Certain promotions which may include amenities like shipboard credits, pre-paid gratuities, drink packages or other packages may be available by category, room type or fare code and may not be combinable with other promotions. For any questions, please consult one of our cruise specialists for applicability and verification. All prices, inclusions & promotions listed on the web-site are current at the time they we published and are subject to change without advance notice. Arrivia, Inc., its subsidiaries, and partners are not responsible for last minute changes to price or itinerary by cruise lines, or for any errors or omissions in the content of this website.